Skip to main content
Welcome to the United Nations
Language:

The UN Technology Museum: Delivering the Message of Peace 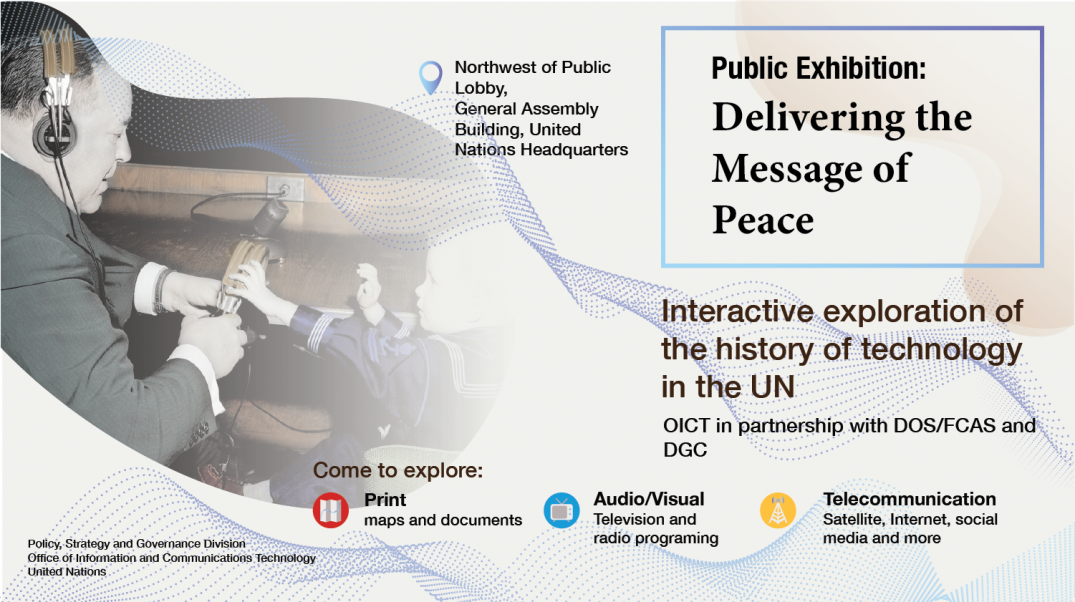 During its 75-year history, the United Nations has continuously utilized the most effective information communications technology (ICT) in its efforts to promote peace and cooperation.

A permanent exhibition, "Delivering the Message of Peace", in the Public Lobby of the General Assembly Building, provides visitors with an introduction to the past and present of technology used within the Organization, while highlighting the transformations of ICT and emerging challenges.

Former Assistant Secretary-General and Chief Information Technology Officer Atefeh Riazi delivered opening remarks during the exhibit’s official launch 28 January. “The fact is that visitors walk in, especially young people, and they can see the technology that enabled peace talks”, Ms. Riazi said. “What we are preserving is not just the equipment. It’s the spirit of what it did”.

Mr. Philip Mango (OICT) was the driving force behind the project. A broadcast and conferencing specialist who joined the UN in the 1970s, Mr. Mango curated many of the artefacts on display from UN Headquarters and the Offices Away from Headquarters.

“I wanted to make it is as immersive as possible,” Mr. Mango said at the opening. “Where you can just touch history".

Mr. Emil Blakaj (OICT) and Mr. Joseph Brew (OICT) were instrumental in setting up the exhibit, which creates a timeline of the fundamental role ICT has played in supporting and sustaining the work of the UN. It includes interactive displays that engage visitors on topics of transformations of ICT and emerging challenges, and multimedia content including photographs and audiovisual presentations, that highlight technology milestones from each decade.

Historical UN artefacts show how technologies and devices supported the daily work of staff. They include a microphone that both U.S. President John F. Kennedy and Cuba Prime Minister Fidel Castro spoke through during the Cold War, headphones used during the Nuremberg trials, and a pencil sharpener that dates to the League of Nations.

“The official copy of the UN Charter is there, the pens that signed the Charter are there”, Mr. Mango said. “When it comes down to it, the first technology we had was typewriters and pens and pencils. That’s what we used”.

Under-Secretary-General for Operational Support, Mr. Atul Khare, said he believes the exhibit “will be a force of inspiration for us to think of more innovation and more technology, better use of technologies, and to bring the users of technologies together with the producers of technology so that, together, we can make a better world".