To reflect this broader scope, the school has been renamed the United Nations C4ISR Academy for Peace Operations (UNCAP), announcing a new level of ambition for peace operations preparedness, including greater ICT coordination and interoperability between troops from various nations as well as enhanced participation of women.

“The ability to communicate is critical in peace operations and never more so than in times of crisis”, said Anthony O’Mullane, Director, Operations Support Division (OSD) OICT. “Technology now plays a key role in protecting UN operations and local populations. The variety of structured learning environments provided by UNCAP is a major step forward as it provides the ICT specialists embedded in uniformed components with the knowledge and skills to effectively operate and maintain UN-provided technologies in support of mandate implementation”. 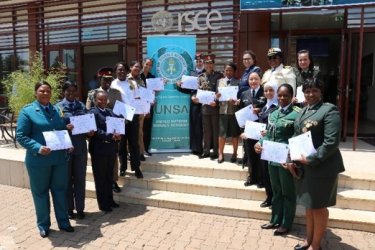 Formerly known as the UN Signals Academy, established in 2015, the Academy responds to the need for training uniformed ICT personnel from Troop and Police Contributing Countries (TCCs/PCCs) on UN technologies and standard operating procedures to fill critical ICT capacity gaps in these areas. The training centre at the Regional Service Centre in Entebbe has graduated over 6,500 uniformed and civilian ICT specialists to date. Its curriculum has continued to evolve with the needs of field missions.

UNCAP continues to make strides in building high-performance capacity on the ground thanks to the commitment of a “Triangular Partnership”— TCCs/PCCs, supporting Member States and the Secretariat (Department of Operational Support (DOS) and OSD OICT)—that share the responsibility to deliver on programme goals and objectives.